So far in my #LearningProject journey I have written numerous blog posts describing my hair-styling successes.  But the journey, overall, has not been smooth.  We are just over halfway through the semester, so I thought I should take some time to (openly and honestly) critique how my #LearningProject has been going.

I am absolutely in love in the hairstyles that I have learned, but learning a skill solely from online resources has been challenging — for many reasons.  First, there are thousands of hair-styling resources available online, which isn’t necessarily a good thing.  I find that having so many resources available to me makes it more difficult to get started on a hair project; I often spend hours upon hours sifting through all the blogs, websites, and tutorial videos rather than actually working on my hair.

With a plethora of hair resources online, I also get a lot of conflicting information.  When I search a particular hairstyle, about a hundred resources pop up all describing how to do the same thing, only slightly different.  For example, there are many variations to the Summer Scarf Updo — one of the five “quick and easy” hairstyles that I learned a few weeks ago.  One version of the hairstyle, known as the Tuck and Cover, uses two small headbands instead of a scarf (see the picture below).  This was actually the version that I tried first, but I found it too difficult to work with multiple headbands.

vs. The Tuck and Cover 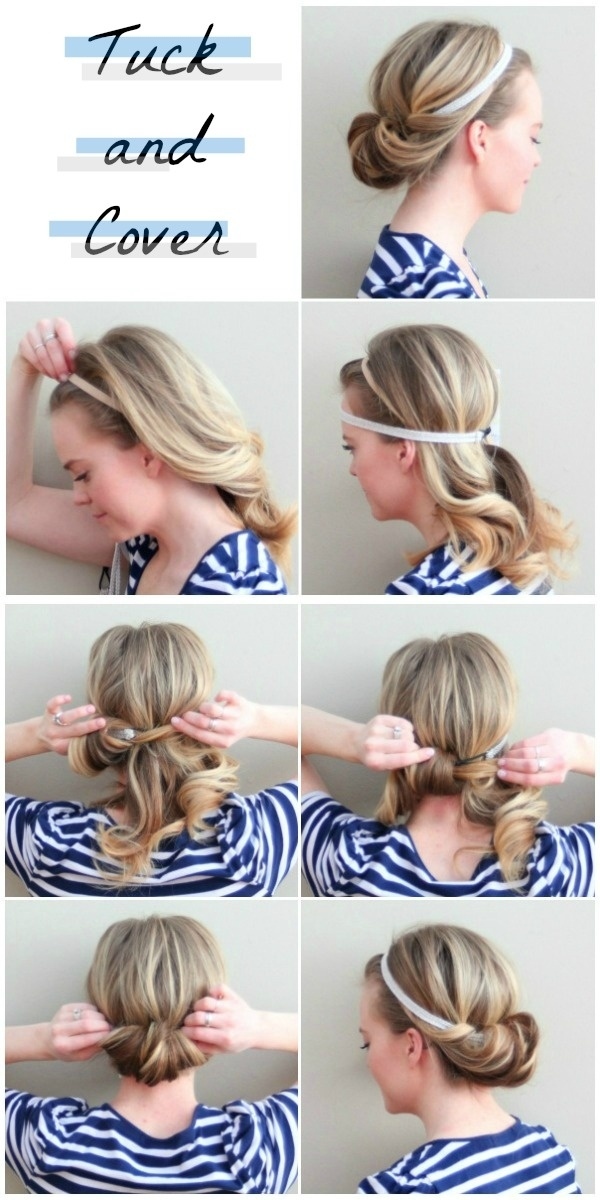 Aside from the high number of resources, finding decent resources has been another challenge.  The Small Things Blog has become one of my favourite resources for all things hair.  Kate, the owner of the blog, posts tons of tutorial videos that are simple and super easy to follow — even for beginners!  Kate also frequently posts about what hair products and tools to use, and I actually referenced one of her posts when doing research on what curling iron to buy. The majority of the resources online, however, are not as good as The Small Things Blog.

For my #LearningProject, I use a lot of pictures off of websites and blogs. Sometimes I get step-by-step pictures, and sometimes I only get a picture of the final product.  I find it extremely difficult to learn from a picture because, more often than not, there are no accompanying written instructions, so I am usually left to interpret the picture(s) on my own, struggling to figure out how they got from point A to point B (like in the pictures above).  With pictures, I also only get one view of the head, so I might be shown the front but have no idea what is going on in the back.  I prefer learning from tutorial videos because I find it easier to replicate a hairstyle when it’s done right in front of me — I can follow along step-by-step.  That being said, I have struggled using videos as well.

I used the above video to learn how to do a messy bun.  At 1:21, the woman in the video says to bobby pin the bun down to keep it close to the head, but I wasn’t sure if she pushed the bun down or forward. It seems like a trivial thing to fuss over, but depending on how I pinned the bun the look of the hairstyle changed.  My mom and I deliberated over this for about 20 minutes.  It would have been nice to have another view of the woman’s head to see what her hair looked like from the back, or even to be able to ask her exactly what she did.

That brings me to my next point.  Perhaps the biggest challenge that I am facing in learning a skill online is not being able to physically talk to someone.  I am a social learner — that is, I learn by talking things through.  There have been many instances throughout my #LearningProject so far where I have been stuck on a hairstyle and  wished that I could have asked the person in the tutorial video a question or to explain something in more detail.

I have also experienced personal frustrations during my #LearningProject.  I am a perfectionist, so every time I attempt a new hairstyle, I expect perfection from myself immediately.  When I don’t get a hairstyle right away (which is often — it usually takes a few hours at least), or when it doesn’t turn out exactly like the picture or video, I become frustrated with myself.  But I guess frustration is part of the learning process — my #LearningProject wouldn’t be as meaningful if I nailed every hairstyle on the first try. Moving forward, I need to learn to expect less from myself.  A few short weeks ago I had virtually zero hair-styling experience — I could straighten my hair with a flat iron, and I could put it up into a ponytail.  That was it.  Since then, I have learned how to curl my hair, I have learned how to do a number of quick and easy hairstyles, and I have mastered the messy bun.  Instead of getting frustrated over what I can’t do (yet), I need to focus on how far I’ve come.

6 thoughts on “#LearningProject: Trials and Tribulations”